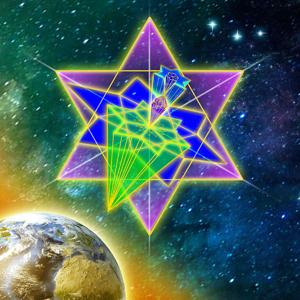 “Collective Alignments" and Infusions of the last nine months continue to bring change for the Planet, orchestrated by our Beloved Christ Michael, activated collectively by the Priesthood of Melchizedek, Synchronized with and amplified by the Heavenly Hierarchies."

The Priesthood of Melchizedek is being recalibrated, infused and configured for the Final Coordinations of The Office of The Christ as the new program of Adonai Tsebayoth is ushered into this plane and dimension. ‘New realizations’ of prophet-hood infused to those ready to carry out the understanding of higher creations, miracles, the “Acts of the Apostles,” the "Collective MessiahShip," our Covenant and Pact as Proclaimed in Church Of The Creator® Sacred Mandate, Ecclesia Magna Charta.

Final activations of/with the twelve energy grid areas for space-time transcription synchronized with the Star System Coordinates. Revealed the doorway to the Chamber of the Galactic Senate, and our Planet representatives have been asked to take a seat.

Activation, for infusion of the codes of limitless intercommunications keyed to go from the TAV ת into the JAH יה, the synthesis of all the Light emanations of the Holy Sephiroth giving Divine Instruction, activating the “Collective Keycodes between dimensions”. Activation of the pictographic communication of the Brotherhood within the brain, quickening the Light Body Overlap, expansion of the grid of the living body of Light through the third eye, opening the channels of crystalline vibration. Opening, igniting and expanding the 8th Chakra, through the transformation of Light, the movement of the “Ze” energy through the DNA-RNA strands, receiving fully the Orders of Whole Light Beings, full activation of the Five Bodies of Light, becoming one with the Eternal Light.

Activation of Medical Astronomy, calling on Metatron, Michael and URIel to realign the “axiatonal lines of the body with the primary blueprint of the Divine Overself, with petition of the governing function of the Higher Evolution – dual communication link regained between Medical Astronomy and molecular biology.” Alignment/Request to resonate the “warm white” color coding to enable to integrate more fully to the higher universes – code the new colors of the “Mitvahs ‘Esh”, the integration of many color thresholds of Light. Activation of the fullness of the Yod Spectrum, constituting the ten radiations centers of soul growth, infusing the Lak Boymer, the Pillar of Light which calls down the Christ Body of Light through the thirty-third degree to inhabit the Jesus Body.”

Time, space continuum threshold crossed, full Activation of the 9-9-9, the stellar programs of the three-fold causality of Father-Son-Shekinah universes operating together in all nine time cells of material creation, neutralizing the 6-6-6, the anti-universe, conquering the inversion of the stellar programs of the Sons of Light. The Seven Seals have been broken, the interdimensional null zone crossed, the cycle of repetition of old patterns, processing and journey completed. Fullness of the Christos, or the Zohar energy, infused on the planetary mind as a new evolutionary membrane upon the skull of the planet.

Petitioned the ‘Sons of Light’ the B’nai Or, the Zohar Race, the Great White Brotherhood of Light, to pour forth the programs of wisdom coming from a higher level of intelligence, spiritual administrators and leaders to initiate us more fully into the Light, unlocking the consciousness dimensions separating mankind from our Galactic Brothers.

The timing is NOW for the Priesthood of Melchizedek to usher in the New Program of Adonai Tsebayoth, Electromedicine, the Language of Energy, and the Melchizedek Communities and Academies of Light “COTC Associate Ministers ......shall Herald, Affirm, Teach and Sanctify in preparation and celebration of that which is descending unto and through the Redemptive Vehicle of the Bestowal Son Jesus, the Office of the Christ."

SO BE IT AND SO IT IS

Gratitude and thanksgiving is extended from the TE-TA-MA Truth Foundation - Family of URI Governing Council Body and Church Of The Creator® National Council to those that facilitated and participated in the 2009 Annual Conference of Associate Ministers and Pastoral Pastors of the Church. Your individual choice, the collective Merkabah created, the Petitions, Activations, Infusions of Trinitized Trinities of Light, responding and resonating the amplified efforts, Program of the Office Of The Christ, have been well received and recorded in the Heavens and upon the Earth.

IN ONENESS OF SERVICE

Of Note:
During this same period, beginning in January 2009 the Foundation has been in the process of moving to new Computer Servers, all of the on line publishing, database, and the COTC Store. Forecast by the service providers to only take a few weeks, this process is now about to complete. 9 months to move from one set of computer servers to the next generation of technology. Although there have been many twists and turns along the way, the timing and duration of this move is worth noting. Due to this move, regular daily updates to the various sites have been placed on hold, so much of the details, reports, from the 2009 Annual Conference are yet to be published. Ministers will be informed as publishing takes place. Editor

Annual Renewal Of Ministerial Credentials - An affirmation, re-dedication to our Covenant & Pact - With each other and Our Parent Creator Source - Suggested as part of the renewal process, links to review, on line and may be printed for your use or for distribution to others requesting information about COTC:

To maintain good standing and legal Credentials as an Associate Minister there are two Annual Requirements, both due at COTC National Office prior to December 28, Annually.

$75 payable: COTC National - for upcoming 12 months, year of any year.

Anyone Ordained after June 30th of any calendar year, the ordination fee covered the following year.

Contents vary for each Minister, but should contain highlights and some detail, dates, etc. and review of Ministerial Activity of the past year (e.g. within the Auxiliary Churches, within the home/family, teaching/counseling - given or attended. Civil or Ecclesiastical Ceremonies, Pilgrimage/travel, education/classes, publications, etc.).

We cannot over-emphasize the importance of documentation of your/our activity. Your report will also be used as a source of information in periodic updates. Your reports uplift and inspire, witness the true reality that there is a Divine Plan, that the concept of “working alone” is only illusion.