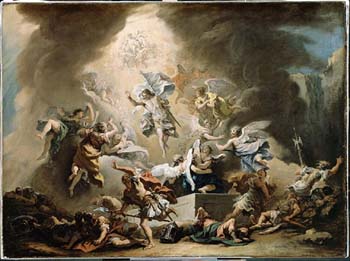 Easter, the first Sunday after the first full moon following the northern spring equinox, holds a greater significance this year. The New Divine Program, Bestowed by The Divine Mother, Holy Spirit Shekinah has moved through the four worlds of creation since 2012, into manifestation in 2017. May we be consciously creating the new paradigm of “Cosmic Christ Consciousness,” unconditional love as we embark beyond the gateway of Easter and Resurrection,  bring through the Descending Programs of the Office of the Christ.

Spring, a time of Regenesis - New Birth and Renewal. – A time to draw upon the Infinite Source, the ONE ready and willing upon our request to supply and nurture our resources. Springtime, releasing the old residues from reservoirs near empty, springing into a new vibration, expression, filling the “tank” or consciousness with expanded possibilities, opening up, focusing our effort to manifest new probabilities of 5th Dimensional Life and Living.  Timing to embrace, receive the Gifts of the Holy Spirit, Healing, Miracles needed for Earth and Humanity.

How do we Align our individual thoughts, words, actions to the Divine Plan during this Holy Season? What does it take?
It is a choice, to receive the Spark with the inhale of Divine Breath, the Holy Spirit Shekinah, lingering in the Space of Grace, letting go as we exhale, releasing all thoughts/all things no longer sustaining our service within the Eternal NOW. Eyes, Heart, Soul, Consciousness focused upward and forward, embracing New Birth, New Heavens, New Earth!

Resurrection - “…revival from inactivity and disuse, rising from the dead, return from the dead, restoration to life!” This is what Jesus the Christ was bringing to humanity – A revival, a return from what is dead – to the restoration of Love. Only this year the amplified energies coming into the planet, the support we are receiving from our Heavenly Counterparts are like no other, unprecedented. Our Heavenly Counterparts are counting on us – to ask, to receive, to take action.

“Church Of The Creator® shall provide the vehicle and vibrational grid to attract those of common understanding, desiring to bring release of Spiritual Relativity, and the Anchoring in of Spiritual Reality and Restoration of the Common (Co-Man) Law, as exemplified through the understanding and pronouncement of our Beloved Brother, Christ Jesus, "Love Ye One Another as I have Loved Ye Also." Church Of The Creator® shall provide that place within, where each may have the opportunity to express the Perfect Principle of Love - that retribution of such will be the instrument and tool to see manifest Heaven on Earth.” Ecclesia Magna Charta: Article VI Purpose and Function, Section 1.

Spring to Easter, Crucifixion to Resurrection, synchronized movement within the Ascending/Descending Programs of the Office of the Christ.

“Let it be known that Our Scripture is Our Life, Our Living History dedicated to bringing forth through The Book Of Glories, the Church and Redemptive Body of The Christos, this living monument dedicated to life over death, through the ascending descending Estates of Consciousness, through the Living Example by experience each unto the other, AMEN. The Great AMEN, the Living Word made Flesh through Our Parent Creator, by The Holy Breath of the SHEKINAH, Our Divine Mother, is manifesting on this Planet and its Systems in allowance and alignment of THE HOLY TRINITY, The Many in One, The One in Many.” Sixth Article, TE-TA-MA Articles of Faith and Constitution. © 1977-2012. All Rights Reserved. 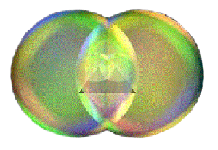 The Vesica Piscis, when viewed vertically, becomes a passageway: The Birth Canal. Delivering the Gift, 33° Bestowed. The pointed oval is a universal symbol of the Divine Feminine. It can be seen as the passage between Heaven and Earth through which Jesus Ascends.

The two circles represent a specific stage of the intermarriage of the Higher Self, Christos, and the Lower Self, Magdalene, created as the Higher Self descends and the Lower Self ascends. The descending arc-Christos is crucified on the crossing or descent into the Lower World. The Christos’ counterpart the ascending arc-Magdalene, the Lower Self, is crucified on her ascent into the Upper World. They each pass through the “gate or passage” between Heavenly wisdom “Sophia” and material manifestation. They each die into each other to produce new life, represented in the almond shaped birth canal. We can see this symbology also as the death and transcendence the Lower Selves, as we experience new birth of our Spiritual Higher Self. Traditional Gnostic mythos interprets these initiations or symbology as the descent of the Christos (Spirit or Higher Self) into the underworld to rescue his sister-wife Sophia or the Magdalene (Soul or Lower Self), who has fallen from her original state of undifferentiated perfection with the Father into “whoredom” or sterile bondage to matter. The Christos incarnates into matter through Grace via the initiations of descent to remind the Magdalene of her true nature - Identical to Higher Self or Holy Spirit - which she rediscovers through her Ascent back to the Father, from threshold through transition.

The proportions of the width and length of the Vesica Piscis are 153 to 265, close to the square root of 3 or 1.732, (See Ecclesia Magna Charta, Church of The Creator®, Appendix II, last pictographic). This pictograph symbolizes humanities genetic evolution through the birth of the New JerUSAlem, New Heavens and New Earth and the Death of the Old Program and Resurrection of the Christ Church in its fullness as originally ordained from the Heavens. The number 153 in conjunction with Fish clearly codifies the Vesica Piscis; the story of the risen Christ, the apostles and the miraculous catch of 153 fish. (John 21:4-12) The key is the Risen Christ….the resurrected Church taken from the Sea of Humanity and brought as a bride. Risen self, Risen Church, Risen Planet…. “Heralding the New Heavens and New Earth.”

The Vesica Piscis is a bridge between Heaven and Earth…a Rainbow Bridge. The two circles of the Vesica Piscis represent life and death, with the birth canal - both of the Divine Feminine and the individual - serving as the passage between. The place between: that is the essence and the magic of the symbol. Between life and death, Heaven and Earth, Dreaming and waking, darkness and light, male and female. The place of “Immaculate Conception,” perfect vertical alignment, perfect balance of male and female, creation seed crystals are formed and birthed.

In Mark 1:17 we read, “And Jesus said to them, ‘Follow me and I will make you fishers of men’.” The Risen Christ, Church and all who Minister… And this was and is our commission: “All power (authority) has been given to Me in Heaven and on Earth.” And this was and is our commission: “Go ye, therefore, and make disciples of all the nations, baptizing them into the Name of the Father, and of the Son, and of the Holy Spirit."

We are being called upon to be courageous, step up, “Herald, Affirm, Teach and Sanctify” the principles and teachings of our Beloved Brother Christ Jesus.

We are all being propelled, further participation within public ministries, service, the Harvest, having been given the first fruits of the Holy Spirit to activate our Bodies of Light. We greet you each with a kiss to the forehead, the recognition of our Brotherhood/Sisterhood, - Kodoish, Kodoish, Kodoish, Adonai ‘Tsebayoth as the resonance which unites the lower vibratory levels with the higher levels of creation as we manifest the “Collective MessiahShip” being the vehicle whereby the fullness of the trinitized counsel of the Holy Spirit Shekinah reigns.

God’s people have been quickened, anointed, the Collective Messiah working within our bodies of Light as we evolve within the Infinite Way. On the highest level, the Messiah is the marriage between the realm of Divine Sonship with the Office of the Spirit under the direction of the Infinite Spirit, Ruach Ha-Kodesh. Through the joint Counsel of the Christ and the Spirit as the Messiah, there is the Merging of Alpha and Omega, the Age of Miracles.

Be The Risen Christ, Be Who You are, Embrace Your Resurrection in this most Holy Season!!!