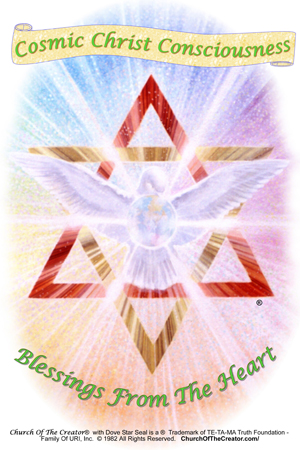 Collectively we are moving through Holy Week with reverence, celebration, re-membering the life walk and example of our Beloved Brother Jesus Christ, what he accomplished on behalf Humanity over 2000 years ago.

We asked through prayer, for guidance, relevance to 2014. How can we apply his example, with intent to fine tune our consciousness focus to the Cosmic Divine Moment of the NOW? We must embrace where we are in the Ascending/Descending Programs of The Office Of The Christ. On December 21-22, 2012 we bore witness to the Birth of the New Earth, Humanities Collective Ascension, through the death of our individual consciousness, the Resurrection, new Birth as Divine Sons and Daughters of Light, Cosmic Christ Consciousness.

Collectively Humanity is Ascending into 5th-Dimensional expressions of life and living, in concert with and upon the New Earth. Ascending into the patterns of perfection, creating upon the New Earth physical bodies of vibrant health, eternal youth, radiant beauty, Peace, Harmony, as prophesied in many Spiritual traditions, many cultures. Ascension can only be accomplished, completed, Collectively, Consciously.

The fastest and most effective way to complete the Ascension Process is for ALL of us to transcend our individual human egos, release old patterns that no longer serve the Divine Plan, and function within every thought, word, action of life and living through:

“Cosmic Christ Consciousness - A joining through Soul Level agreement of those personalities who have released the individual I AM growth pattern, into the COLLECTIVE I of GROUP UNITY; living in the Group Aspect of the Christ Body; going beyond personal-soul expansion and joining in GROUP to create a synergism of combined spiritual evolvement within and through the OFFICE OF THE CHRIST.”

All of Humanity is being made aware, informed through ever accelerating communications, technology, social networking, inner and outer Collective Consciousness Infusions of Divine Light, Grand Cycles Coming to Completion - Opening a New Cycle - Transfiguration: Collective Ascension of Humanity. On some level every human, Child of God, is aware of the Ascension Process, step-by-step, for example, the rollover from 1999 to 2000, and the publicity, world consciousness focus on the "end" date of the Mayan Calendar. As representatives of the Priesthood Of Melchizedek, The Office Of The Christ, Lifestream, gifted with greater understanding, veils lifted, we bore witness to the miracles taking place, the Birth of the New Earth on December 21 - 22, 2012, shifting to the next Consciousness Evolutionary Cycle – Program Adonai Tsebayoth, Creator Daughter’s Aeon, Program of The Holy Spirit Shekinah.

As the process from Crucifixion to Resurrection took three days for Jesus to manifest his Light Body, visible, but not of the old Earth, so does the Collective MessiahShip, Body Of Christ, move through three - 12 month cycles….and Humanity Collectively is half way through…now in the period of chaos, death (of the old self), “the dissension into Hell”, moving into the resurrection, Ascension, wearing, manifesting New Garments of Light, 5th Dimensional Human Expression.

Since 1999 COTC/TE-TA-MA Ministers have manifested 12 Worldwide Collective Conferences bringing from Heaven to Earth the Vibrational Matrix of the Conference Program, activating through the “physical embodiments in form”2, The Priesthood of Melchizedek, the Divine Plan unfolding. Of note, the 2nd Ordinating Minister Conference, Medford, Oregon, March 17-21, 2005, focus “Heralding the New Heavens and New Earth.”

The Conference consciously anchored, infused the Collective understanding, “Heralding the New Heavens and New Earth” almost 10 years ago. This is accomplished through Amplified Infusions, Heavens to Earth, Alignments utilizing:

CONSCIOUSNESS GRIDS – “The network of Light Energy created and maintained, facilitated by specific consciousness focus; these grids are functional co-creative energies for the manifestation of Divine Truth on Earth, unifying the inner wisdom planes with this plane of reality.”

Collective Focus, in this Plane and Dimension, Aligned with the Heavenly Hierarchies, is a function of The Priesthood of Melchizedek, who we are and what we are doing as COTC Associate Ministers. As we come together Collectively, perfectly synchronized within and through the Office Of The Christ, through human free will choice, we activate through asking and receive the amplified assistance necessary for Consciousness Evolution, the Divine Plan and the Ascension of Mankind, this Planetary Sphere and its Systems, - "Church Of The Creator®"

Consciousness - the upper level of mental life of which the person is aware as contrasted with unconscious processes Evolution - the gradual development of something, esp. from a simple to a more complex form.

As we review the Easter Story: What Does It Mean? How does it relate to NOW?

Within the Priesthood of Melchizedek, Moses, a trinitized expression, was in his part, the ordained receiver, bringer of the LAW, clarity – “There is only One Living God.” During the time of his infusion of the Higher Truths, (Process of Receivership - his memory re-activation lying latent within the Mind), there was also a reactivation of the opposition gaining credibility within those close to him. Trusted individuals within his auric field were choosing to build a parallel universe, an overlay on the blueprint, of that which he was in receivership of, thus limiting the outcome and necessitating another furtherance of causation conceptualization.

Our Beloved Brother Christ Jesus demonstrated a profound truth of Divine Law. One representative, of Commissioned Spiritual Lineage, through human choice can stand in the place (space) of the Whole of that which they represent. He died so that we might live. He experienced consciously the illusion of death, publicly witnessed by representatives of all 12 Lifestreams, so that we automatically inherit the Divine Birthright of Everlasting Life within the Kingdom of Our Father's Many Mansions.

Jesus, High Priest of the Order of Melchizedek and Lifestream of Christ Michael, brought in the Redemptive Body as LORD REDEEMER. He carried within his Divine Pattern the seed of balance with the female, the daughter, the co-creative balance to the Son, the manifesting aspect of Our Divine Mother Essence. What he planted and nurtured was unable to mature in that the evolving consciousness chosen (his apostles) denied, on this plane and dimension, the Divine Principle of Balanced Creation. As history clearly shows in this human drama, histrionics played a large part in co-creating through ego personalities caused by spiritual immaturity. The human choice once again was to readjust the given fabric and pattern, to suit the circumstances of effect, rather than weave on the Divine Blueprint of causation. Hence the continued domination of the masculine Priesthoods and mind concepts, still evident in this day and age.

Resurrection - to bring (a dead person) back to life; to cause (something that had ended or been forgotten or lost) to exist again, to be used again.

While ministering in his garment of flesh, Christ Jesus always beheld the females on equal status, a necessary balance he lived and preached. Through their unconditional love and perfect beholdance, (immaculate concept), deemed necessary to support his resurrection, their dutiful commitment helped accomplish what could not be done through the male apostles. It was with the women apostles, Ministers in the fullest sense of the Word, that he remained, his mother and those other feminine beholders and supporters, who chose to be close to him and form a protective buffer.

Their camp, the women's Apostolic Corps, was a place of refuge and retreat, enabling him to have freedom of movement whilst living in their midst. Through him they learned of the Greater Plan or larger picture, becoming adept from the Wisdom Plane to see the true Spiritual Reality in concordance with the physical relativity. It is to be understood that for every male apostle there was a feminine counterpart. Not necessarily mated, but in a functioning manifest expression. And so it continues in the now, perpetuity of consciousness, forever attempting to sustain and maintain balance.

Today in the continual flow of Lifestreams (incarnations), the feminine representatives are here in form, to support the Shekinah Promise, to transcend all concepts, for this must take place before the next part. The "Feminine Movement" taking place on the planet, in itself provides the gearing up for the next sequence. This Process of Receivership is ready and awaiting (in the wings) its cue. The Gifts and "Miracles" require the molecular-alchemical balance of the Holy Spirit Shekinah. Once achieved this Divine Coding Template can only activate at the precise timing of mutual recognition and dedication to the unified effort in the earth plane within and through the Office Of The Christ.

Only now is the feminine aspect, Mother, Daughter, Sister, beginning to be given the recognition she truly is due. In the Glorious enfoldment upon us, the seed held in the purity and rich fertile ground of the Heart, is blossoming into fruition. The Divine Image within us, and through Her, brings the fullness in revelation and truth of the Triune Nature of All Creation, Three In One, Holy Trinity, Divine Deity. NOW is the Creator Daughter's Aeon, HOLY SPIRIT SHEKINAH.

Our Beloved Parent Creator Source is a Trinitized Expression of ONE, infinite and evolving. For those choosing release from the death program and dying estates of consciousness, the Exodus Vehicle is aligned to and upheld by the infinite Love of this Paradise Trinity. In order to participate in the next part of the Greater Plan, individual and singularly minded consciousness, (isolated states), will need to come into alignment through the trinitized vehicle of all planes and dimensions. COSMIC CHRIST CONSCIOUSNESS, the Spiritual-Physical (in form) Family. Again we refer to the Hierarchical Family Tree, the overcontrol synthesizer of the Divine Blueprint.

Through the Collective Grids of COSMIC CHRIST CONSCIOUSNESS, the supportive energies of the Order, Brotherhood and Priesthood of Melchizedek, the axial-nucleus alignment to Archturus for this planetary sphere and its systems, Church Of The Creator© represented through the Heart, Mediatorship of the Feminine Principle, has been accomplished. Those choosing to transmute in all aspects, each of the 12 Lifestreams, through unconditional Love and Light, are bringing about the upliftment of mankind's vibration, from this duality plane into the Trinitized expression of the Redemptive Christ Body.

Current and unfolding events are not random. The Great Pyramid has been reactivated. Tangible movement is unmistakable on the Earth Plane, current events. The Seven Seals have been broken. The prophesy of the Capstone returning, in the coming of Moses, Jesus, Uriel, Metatron, and Michael is close at hand. However, the Cosmic Christ Consciousness, Christ Body infused, death program released, already resides within each of us, we need only resurrect it!

Encouragement is given to all Ministers to review, reflect, petition in prayer, “What Father within and through the Office Of The Christ are the next steps to be taken, highest and best use of my God Essence Energy in Service to the Divine Plan?” Listen and take action, implement the inspirations of the Heart, for the Heart knows the timing is NOW!