Our Beloved Franklin was many things to many people.  From a human perspective it is difficult to convey in earthly terms, who he was or how much he did in service to the Divine Plan. 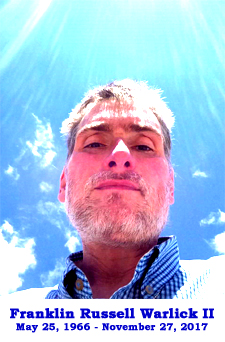 He was like many of us a Beloved Son, Father, Brother, "Grandda" within his physical family. To quote from the record, his  "Celebration Of Life" service:

"Franklin was born on May 25, 1966 in Chattanooga, Tennessee to Frank and Mary Ann Warlick. Growing up he enjoyed participating in the marching band with his older sister, Angela. He graduated from Morrow High School in 1984 and briefly attended the University of Georgia before pursuing his true passions. Franklin began working for Cox Communications in 1995 and found a home in their lT department. Franklin worked with computers his whole life including some of the earlier forms of commercial email.

His first child, Justin, was born in November 1988 and his second child, Hanna, was born in May 1996. Both children are currently pursuing their bachelor's degrees in engineering. He enjoyed spending time with his granddaughter, Elizabeth. His family remember him as a loving and funny father who encouraged them to pursue their goals.  He was a generous individual who loved helping and left a lasting impact on others.

Franklin always loved music and instilled that value in his children. Many of his friends have suggested songs that either remind them of Franklin or songs they knew he loved.  • Truckin' by the Grateful Dead  • Limelight by Rush  • The Time Warp from The Rocky Horror Picture Show • Brother Love's Traveling Salvation Show by Neil Diamond • Turn, Turn, Turn by The Byrds"

[A close look at the lyrics of the songs others knew he loved reveals considerable about Franklin.]

From the perspective of the Ministerial Unit, TE-TA-MA Truth Foundation-Family Of URI, Inc., there are some additional discernment's I would like to share. Franklin was a Divinely Commissioned Being, present on Earth to assist, advance the Divine Plan.

Rev. Warlick was Recognized and Witnessed on June 17, 2006, as a Pastoral Pastor, TE-TA-MA Truth Foundation-Family Of URI, Inc.

"Those in one part of the Body of this organization are, in effect, Pastoral Pastors or Missionaries, in that they are considered links in a chain joining together those of like-Mind....It is through Direct Spiritual Lineage that those of Like-Vibrational Patterning are coming together as agreed before entering this Earth Plane to work in a Group Consciousness to help this Planet and Mankind. These then as Pastoral Pastors, who through Spiritual Bestowal are Designated Representatives in the Form, through their Total Personal Expression of the Principles of TE-TA-MA, are recognized by TE-TA-MA as such, in however they choose to express."

Most of his family, colleagues at Cox Communications, social networks, deadheads, others to whom he ministered most likely had no idea. He was not only a master at keeping spam out of emails, he was a master of compartmentalizing his many venues of participation. 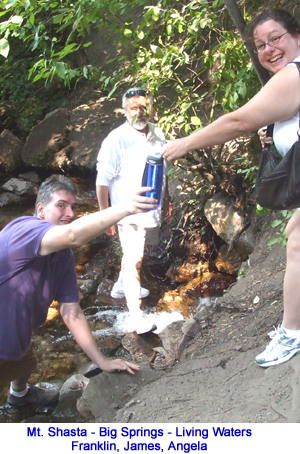 Within my responsibilities as Electronic Publications Coordinator, Franklin was our Senior IT Support. In a very complex world wide web he helped to create, Franklin, on behalf of the Foundation/Church knocked on the doors of Google.com, Symantec.com, other internet giants controlling the gateways that were blocking good works. Franklin got their attention, stood up for what was right and they removed the blockage, opened the gates for higher octaves of expression, Cosmic Christ Consciousness.

Like all of us "Human Beings" - similar to the DNA encoding, the Vibrational Frequencies of the names we choose hold clues to who we are, our essence, what we chose to overcome before entering this mortal world of duality.

Warlick - "English : perhaps an altered form of Warlock, an English surname of uncertain origin; it is more likely to be from Old Norse varðlokkur ‘incantations’ than from Old English wǣrloga ‘traitor’, ‘devil’." That is a tough one and relates to the consciousness, mis-conceptions about the part played, LifeStream of/by Judas Iscariot.

Franklin - "free-man, a holder of fairly extensive areas of land, a gentleman ranked above the main body of minor freeholders but below a knight or a member of the nobility."

Russell - "Used 735 times in the bible is the foundation of God’s word. It is a number of completeness and perfection. It signifies collective consciousness, completion faith and spirituality, Mysticism, wisdom, peace, endurance.  Usually, they are involved in charities and humanitarian foundations; helping the needy. They are efficient, responsible and committed to their work and expect others to react the same."

Franklin was not afraid to step up to the plate when asked for help. The clues within his name, my own experience were further confirmed through personal testimony, at his "Celebration Of Life" service. It was both a joy and lifted my heart to hear his "big sister" my wife, female aspect of the Ministerial Unit, share her perspectives, stories, wisdom, to all who gathered.

In one place were his physical family, long time peers, peers of his children, people he befriended under mysterious circumstances,  the host "MC" other attendees of many "Rocky Horror Picture Show" events he attended, singing and dancing "Lets do the time warp again."  Not everyone understood the deeper meaning of the movie, beyond the fun and outrageous characters. "Don't Dream It, Be It!" or to quote someone looking deeper into the meaning, "Rocky Horror is best understood as a tragedy, and its message is "be kind to your fellow man, or your downfall will be certain and spectacular." ..."As tempting as it is to focus on the outlandish sexual escapades in the show, I actually think they are secondary to the main message, which is the old Golden Rule". - Adam Nyhan.  Franklin understood, participated in Life!

"Who are these People? - those choosing to Celebrate His Life - December 2, 2017 - Planet Earth, Morrow, GA, a lot like like the galactic bar in the first Star Wars movie, some very interesting characters.

Franklin's cover was blown as individuals from a universes mostly unknown to the others in the room shared their story of how special Franklin was to them and why. In almost every instance, he had on some occasion, listened, let someone know they were perfect just as they are,  "its OK to be different."  Franklin Beheld their Perfection, loved them unconditionally without judgment, and tears flowed as they delivered their testimony to his ministry, those principles that touched them so deeply, profoundly, in their words, "changed my Life."  For those who did not already know, he was also a keeper of the records, mementos, that he cherished. In one shared testimony, he produced 30 year old jelly bean, "who does that?"  - evidence, that he did not forget, and could prove it when necessary.

Franklin did not choose an easy life walk. He was often judged, seen for other than who he was. He suffered from betrayal and heartbreak. Franklin was super-sensitive, compassionate and transmuted a lot of pain, mis-creation by others, and it took it's toll on his physical body. 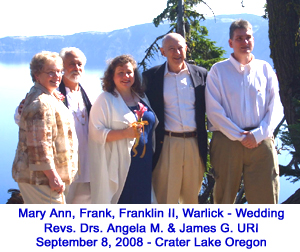 In 2008 we were blessed by her Mom, Dad, Brother Franklin, Aunt, Uncle,  who all stood with us on the rim of Crater Lake as we anchored our Spiritual Commission within man's law through marriage.

Since 2015 we have made multiple trips back and forth across the USA. Through following guidance received, we remain one step ahead of what is going to be needed. Franklin's transition was no exception. It was our honor to cook and serve a Thanksgiving Meal to him, his family and others in Atlanta, November 23, 2017.  Without planning from the earth be front and center in support of Franklin's departure for Home.

"God works in Mysterious Ways" and Rev. Franklin Russell Warlick II, was one of the means, entering realms where many fear to venture, often unseen, but gathering the harvest, loving those who did not ask but needed it the most... Pastoral Pastor.

If you have Testimony relative Franklin, your experience, perspective, we encourage you to share.  Please submit via the Contact Form