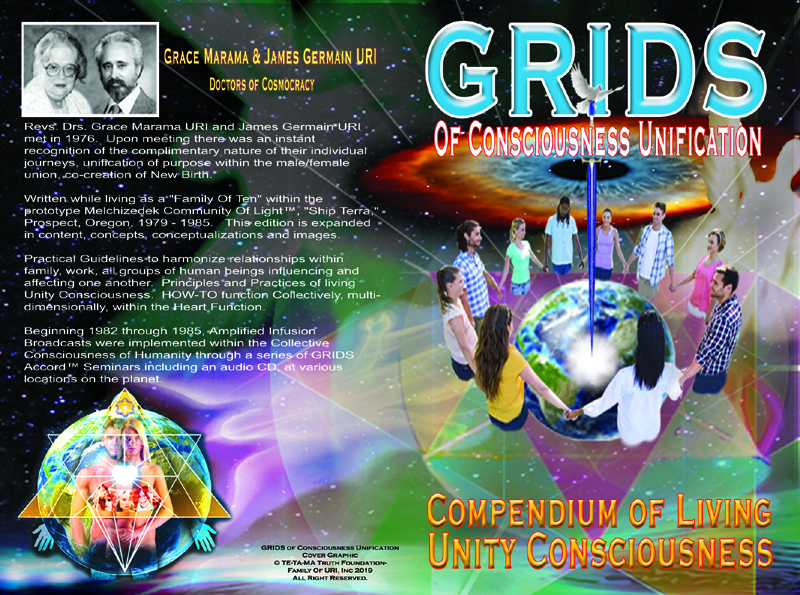 Click above link -  to see on Amazon Books - details - to purchase.

GRIDS of Consciousness Unification provides techniques to Align our daily life, living within the Divine Blueprint, the Family Unification of Mankind, Multi-dimensional synchronization, as wheels within Wheels.  Group techniques applied within collective configurations through sitting in a circle, resonating within the Heart function, in the NOW.

Rev. Drs. Grace Marama URI and James Germain URI met in 1976. Until that time, each traveled the individual journey of life experience, transitioning into dedicated service to God and Humanity. Upon meeting there was an instant recognition of the complimentary nature of their individual journeys, unification of purpose within the male/female union, co-creation of New Birth.

The words within, GRIDS of Consciousness Unification, have been authored by the individuals, as representatives of example, while living as a "Family Of Ten" within the prototype Melchizedek Community Of Light™, "Ship Terra," Prospect, Oregon, 1979 - 1985.

First edition, GRIDS of Consciousness Unification was published in 1982. Beginning 1982 through 1985, Amplified Infusion Broadcasts were implemented within the Collective Consciousness of Humanity through a series of GRIDS Accord™ Seminars including an audio CD, at various locations on the planet.   Through the representatives gathered, consciously Aligned and amplified within and through multi-dimensional participation, the GRIDS of Consciousness Unification, were anchored, activated and operational. Third Edition published as eBook, with audio function.